Invasive non-native species (INNS) are species which have been introduced, as a result of human activity, to an area where they are not native, and which are detrimental to native species and habitats.  Well-known examples are Japanese Knotweed, Rhododendron, Grey Squirrel and Mink.  As well as affecting the natural environment, many INNS have a negative economic and social impact.  For instance Japanese Knotweed damages buildings and Mink attack domestic poultry.

Scottish Natural Heritage has asked Lorn Natural History Group to raise awareness of INNS and to encourage recording of them, so that their spread can be monitored and appropriate action taken.  They have made funding available to us for this purpose.

There is no definitive official list of INNS.  The most comprehensive online list seems to be GB Non-native Species Secretariat – Identification Sheets.  This has most of the well-known INNS and many others that are less well-known, but there are some that it omits.  Each species in the list is linked to an excellent identification guide and summary of the species’ effect and spread; these are well worth reading.  The same site’s Species Gallery lists even more species with links to photos of them.  All the images on this page are taken from that gallery.

Some species of concern in Argyll 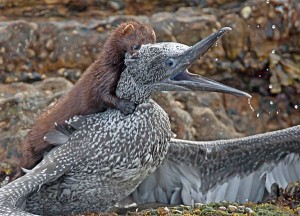 Some of the worst offenders in our area are detailed below.

American Mink – This species has devastated seabird colonies along the Argyll coast, and many offshore islands that used to teem with seabirds now have none.  Mink also attack ground-nesting birds on the mainland, and have wiped out the Water Vole from many parts of the country.  They cause immense economic damage by reducing the tourism interest of boat trips and attacking domestic poultry and game birds.

LNHG members Clive Craik and Rob Lightfoot have done a lot to help local seabird colonies survive the threat of mink, including the setting-up of mink-proof tern rafts in Loch Creran, which are so successful that they have become one of the largest tern colonies in Britain.  This has entailed a huge amount of work, but it is only a tiny fraction of the effort that would be needed to get rid of mink altogether and restore our seabird colonies to what they were.  It can be done, however: miink have been almost eradicated from the Western Isles.

LNHG itself owns some mink traps which it has deployed successfully in the past and which are currently available, together with advice, to any responsible person for the purposes of mink control. 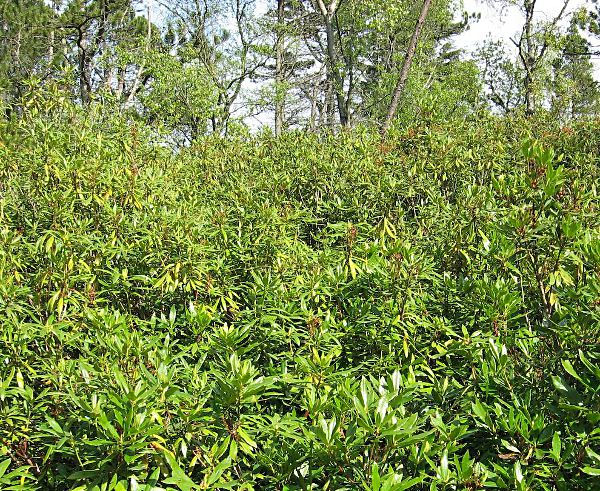 Rhododendron – Aggressively colonises native woodlands and eliminates the ground flora, bryophytes and lichens on the trunks of trees, as well as all the associated invertebrates and other animals.  It completely destroys the complex ecosystems that exist in our woodlands.  The woods themselves will disappear eventually as Rhododendron prevents tree regeneration.  Rhododendron is particularly virulent in the west of Scotland where it finds ideal conditions in the wet climate and acid soils.

It is extremely difficult to eradicate Rhododendron once it is established in a wood.  It spreads vegetatively, by means of branches rooting wherever they touch the ground, and by seed, which persists in the soil for a number of years. 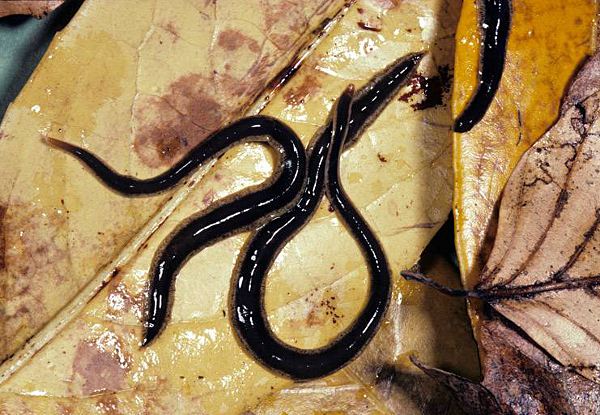 New Zealand Flatworm – Feeds on earthworms and will often completely eliminate them from a garden, thereby removing the food source for native birds and animals which rely on earthworms as part of their diet.  It is mainly spread by movement of plant containers.  Anyone who does not yet have flatworms in their garden is advised not to bring in any plants in containers unless extreme biosecurity measures are taken.

The flatworm was initially confined to gardens and garden centres, but has now spread into the wider countryside where it has the potential to reduce the earthworm populuation to very low levels, altering the soil structure, impeding drainage and slowing decomposition of dead plant material.  This is likely to affect the vegetation and all other aspects of the ecosystem, and could be very harmful to both native ecosystems and agriculture.

In the area between Dunoon and Loch Eck, most agricultural fields are infested with flatworms.  Moles have disappeared from these fields, while fields without flatworms still have moles.  Source James Hutton Institute – New Zealand Flatworm 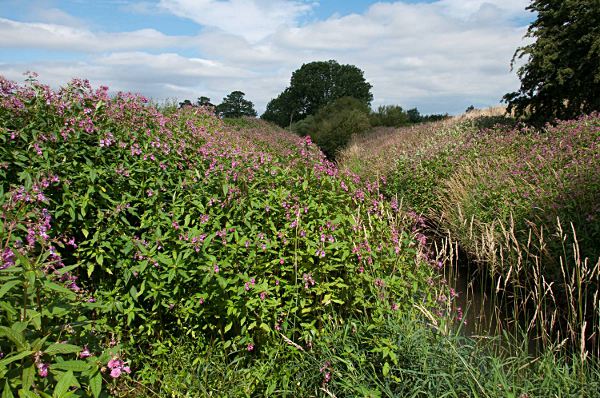 Himalayan Balsam – Chokes large areas of land preventing anything else from growing.  An annual plant which is easily pulled up but spreads prolifically from seed, which can be projected up to 4 metres from the plant by the explosive seed capsule.  Colonises river banks, damp meadows and woodland.  It can be eliminated in a few years if all the plants are pulled up or cut before they set seed.

Japanese Knotweed – Forms dense stands along rivers, coasts and roadsides, completely excluding the wide range of native vegetation that formerly grew there.  It can also grow through concrete and tarmac and cause structural damage to buildings.  It does not produce seed but can re-grow from tiny fragments of root and often first appears in an area due to human transportation of topsoil and other material.  Contractors and developers have legal obligations regarding Japanese Knotweed and if it appears on a site where they have been working they may be legally obliged to remove it.

Cotoneaster integrifolius – Smothers cliffs and rock-faces, wiping out the specialist native vegetation of these important habitats, including lichens.  Spreads by birds eating the berries.  This is a serious problem especially on Lismore where it is taking over the areas of exposed limestone rock with their nationally important plant and lichen communities.  It is also plentiful on Kerrera and many other places along the coast. 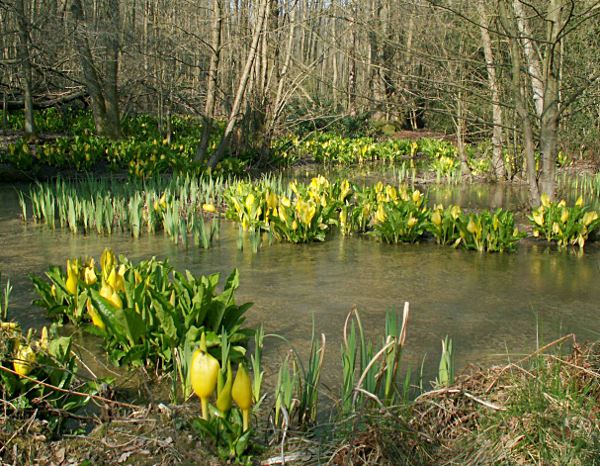 American Skunk Cabbage – Often planted beside ponds and streams in gardens from which it spreads downstream crowding out the rich variety of native plants that normally grow along the banks of watercourses.

Ash Dieback (Chalara fraxinea) – This is a fungus which has spread across Europe devastating ash tree populations.  It reached Scotland in 2012 and is expected to spread to ash woods throughout the country, with a great many trees likely to be killed by the fungus, but hopefully there will be some resistant strains which survive.  Trees in the north and west of the country, which includes our area, are thought to have the best chance, and are a top priority for monitoring and preventive action.  Our Ash Dieback page described the situation in March 2013.  In the two years since then the spread of the fungus across Scotland has been slightly slower than expected, but it is certain to reach every part of the country eventually.

There are a large number of other tree diseases moving towards Scotland, or already here, which pose a severe danger to many of the country’s native trees and shrubs.

This list shows some Invasive Non-native Species that occur in our area, or are heading this way, and that can be relatively easily identified.

We will add to this list and provide more information in due course.  In the meantime there are many useful resources on the web, especially the links below.

You can send in any sightings of Invasive Non-native Species (or of any other species come to that) using the online form on the ARBReC website, or email sightings@lnhg.org.uk with the details if you prefer.  If you are not sure of the identity of your species, please send a photo to sightings@lnhg.org.uk, or put one on the  ARBReC facebook page.

If you have a number of sightings or records, you can send them as an Excel spreadsheet, or sync them if you use Mapmate, or any other method that suits.  It is no problem at all if your list contains INNS and non-INNS species mixed together.  Don’t bother sorting them, our database will do that.