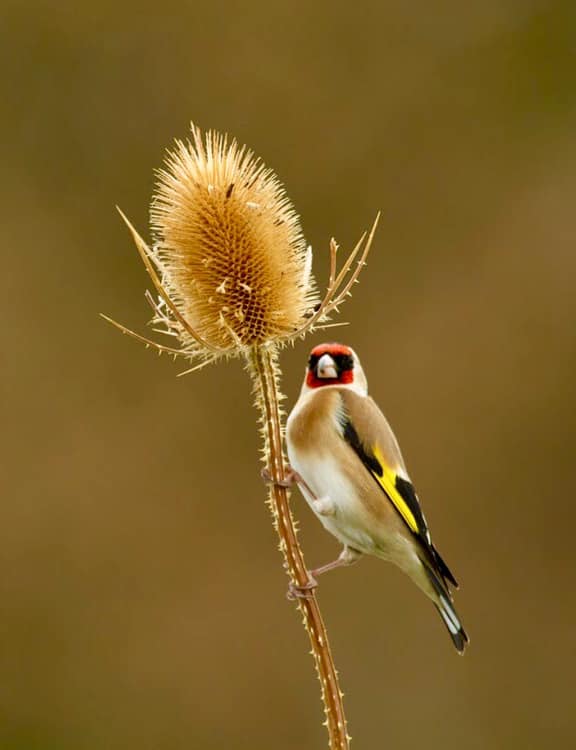 Goldfinches are one of our prettiest native birds with their bold patterns of red, yellow, black and white. It is easy to see why the collective name is a ‘Charm’. It may, however, refer to their song, a pleasant rambling twitter or tinkling. The delightful song is a composition of this call and other rattling notes. They feed on various tree seeds, such as alder and birch, and on thistle, teasel and dandelion seeds, which it can obtain owing to its thin bill and weight. In fact, the scientific name of a Goldfinch, Carduelis carduelis, is derived from the Latin for “a kind of thistle” or “thistle-like plant”, Carduus. The seeds lie at the base of long tubes protected by sharp bristles and only these birds, apart from Crossbills, have long enough beaks to pluck them out. Outside the breeding season, Goldfinches roam in flocks in search of food and groups of up to 40 birds are quite common in the winter. They are often also seen in mixed flocks with other finches moving from one feeding area to another. They will feed at bird tables in your garden, preferring to swing acrobatically on hanging seed feeders, full of niger seeds or peanuts. Some of our breeding birds migrate to south-western Europe, e.g. France and Spain. Interestingly, many more of these birds are females than males, and birds that migrate one year will not necessarily migrate in others. The autumn population is increased by the passage of continental birds into eastern Britain.