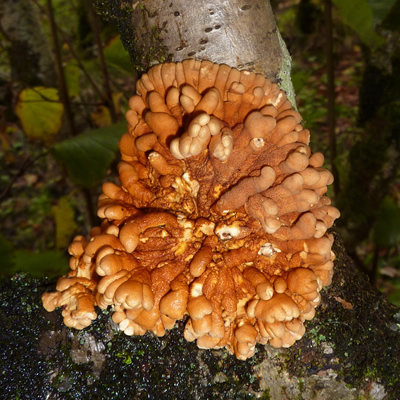 We were very lucky with the weather for today’s survey walk, in contrast to last month’s effort!  We visited a wood near the Tigh an Truish armed with a grid ref and a photo of a single Hazel Gloves fruitbody that was found there by Andy and Richard in 2007. The health of the hazel stem it was growing on had been described as “poor” in Andy’s report, and sure enough it turned out to have rotted at the base and fallen over, and there was no sign of the Hazel Gloves that once grew on it.

But to our great delight, Nigel spotted 5 fine Hazel Gloves fruitbodies on a branch of another hazel nearby. These were not present in 2007, or they would surely have been noticed, so perhaps they arose from spores of the original fruitbody before its stem fell over.

The hazel in the wood was scattered among oak and birch. It looked as if it had been browsed by animals in the past, as there were few fresh hazel stems arising from ground level and not much in the way of really mature stems either. Only occasional small patches of Lobarion lichens were found, but where these did occur they included interesting species such as Leptogium brebissonii and Sticta limbata. Remarkably, Lobaria virens seemed to be absent, but L pulmonaria was present in small amounts.

On leaving the wood we found a fine oak with 3 Sticta sp (sylvatica, limbata and fuliginosa) growing together in a single patch for easy comparison. It had a great many other lichens including the Dice Lichen (Pertusaria pertusa), and the day’s only sighting of Pannaria rubiginosa. One branch was profusely adorned with Leafy Brain Fungus (Tremella foliacea), spotted by Annie.

We then walked through a beautiful landscape of small knolls and hillocks, over to the west coast of the island and back via Puilladobhrain to the Tigh an Truish where we had an excellent lunch.

Thanks to all who took part!