The weather was set today to provide us with the opportunity of an excellent mid-week walk. We met at Cuan ready to catch the 0945 hours ferry to Luing. As we stood waiting for the ferry two Black Guillemot flew through Cuan Sound and a Rock Dove was almost missed, as it slowly probed along the shoreline. We had a good view of the strong currents in Cuan Sound where depending on wind and tide there are sometimes standing waves.  We were soon boarding the ferry, and in no time being met by Rosy and Zoe to swell our numbers to eight.

We left the slipway taking the path beside the ferry shed and followed the small bay, passing through a gate. We left the pylon on our left and followed the path between old water filled quarries and an old derelict building. The whole area is full of old slate  workings and commands views across to Ellenabeich, Easdale and Mull. We discovered a pile of discarded slate, full of iron pyrite (fool’s gold).  This slate was classed as low grade, for when the pyrites are loosened it can leave holes which allow the ingress of water. 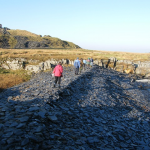 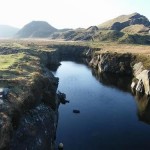 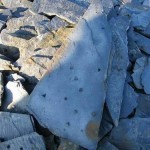 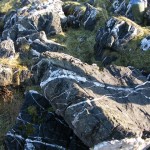 Further on Zoe pointed out some large limestone boulders containing wafers of marble (calcium carbonate).  These seams were created by the recrystalisation of the pre-existing rock at the beginning of the Tertiary period, some 60 million years ago.  The eruption of the volcano on Mull produced such heat and pressure that these seams were formed.  The whole area was covered in these unusual rock formations.

We continued on round to Port Mary and investigated the beach, to discover several species of seaweed. There were four types of brown seaweed which grow on the upper shore, channelled, serrated, spiral and bladder wrack, and two types of green seaweed, sea lettuce and cladophora which grow lower down.  Some of the larger red Oarweed  had also been washed up on the shore, probably from one of our recent storms.  From here we had good views across the Firth of Lorn to the Garvellachs and to Belnahua where old derelict buildings are still visible.  These formed the houses and quarry buildings of a time not too long ago. 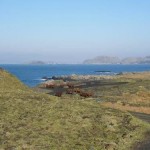 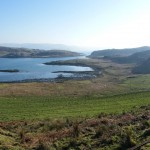 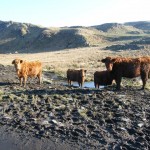 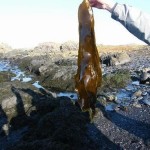 We turned inland now, passing several Luing cattle, and followed the farm track uphill and passing through a farm gate.  As we did so, two Skylarks called as they flew overhead, giving the impression that spring was not far away. At the brow of the hill, we had good views down towards Torsa, Ardinamir Bay and Craobh Haven.
On reaching the main road we turned south to have a look at two small bays hoping to see the otters.  In the last bay we found a Curlew, several Red-breasted Mergansers and two Mallard.  Then to our delight Rosy spotted the two otters playing in the sea near Torsa Beg, a mother and her young.  They then headed towards Torsa Beg and spent some time playing amongst some rocks on the foreshore.

It was now unfortunately time to return to the ferry, to catch the 1230 hours crossing back to Seil. As we approached the caravan park, we spotted Rosy’s husband Mike out with his camera. We soon realised what he was trying to photograph as to our amazement four Bottle-nosed Dolphins were darting about and leaping out of the sea, giving an incredible display.  This was my first experience of Dolphins close to the island and it was a great thrill. 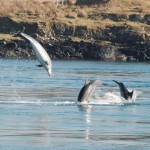 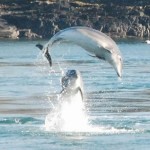 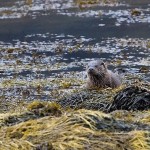 The Dolphin pictures are by courtesy of Mike and Rosy Barlow

This walk had produced more than I could ever have imagined, great scenery, history, geology, seaweeds, birds, otters and those wonderful Bottle-nosed Dolphins.  How will I ever find another walk to match this superb walk on Luing.  Our thanks goes to Rosy Barlow and Zoe Fleming, two of our members, who made this all possible. I don’t think it will be too long before we are returning to Luing to discover more of it’s secrets.